Thank you to all who have provided input on Market Square.
Here is a link to the proposals put forward to the selection committee.
The online form to submit your input closes at midnight.
http://bit.ly/MarketSquareInput2016
Here are two links to Rob Ritz’s plan. http://bit.ly/RitzMSBeforeAfter2016 http://ritzarchitect.com/marketsquare/
I realize including Rob Ritz’s plan will be disappointing for some. Whether
the selection committee includes it in their review of proposals, it is very much
under consideration by many in our community. My hope is that we can look at the strengths put forward in each proposal
and hear the concerns raised. As I said earlier this week, m hope is that we
remember we are neighbours in a community . The greatest tragedy in this
endeavour would be for us to gain a meeting space but not want to meet.
For what it's worth, a few of my thoughts:
I appreciate the desire for movement on this issue but support the plan for
the core - transit, Cooper Site, parking and Market Square. These need to be
borne in the decision-making of each one.
Skating rink. If we are going to add a skating rink in the core, I would prefer
it be added to the Cooper site in conjunction with a community hub. That being
said, if we need outdoor rinks, I wonder if using sites like Lakeside Drive and/or
other neighbourhood parks might be more effective given their locations.
Sightlines. When I picture events at Market Square, I see visibility for the
audience as a frequent issue. I hope this is kept in mind when designing the
space so that as many people as possible will be able to fully participate by
being able to witness the proceedings.
Operating costs. As plans are made, my hope is that both the operating and
capital costs will be factored in to the final decision. The mention of additional
amenties being required as well as the ongoing discussion around the potential
cinema project at City Hall makes me wonder if the Cooper Site were to become
a community hub, if some offices currently located in City Hall might be better
suited to such a space thereby potentially addressing such a concern.
Transit and parking. I recognize many see transit and parking as non-issues,
I disagree. These help connect many and need to be considered in an overall plan. 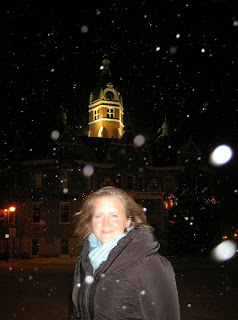 My comments are reflective of hundreds of comments and
conversations over the past few years. My hope is that all
who are invested in the decisions to be made on this issue
are able to hear not only the comments raised in the process but appreciate the underlying needs they speak to so that we can come together as a community that strives to create inclusive solutions.
Posted by Kerry at 11:33 PM